It is human nature to organize things in categories; to name them for universal understanding; and, to place them all in orderly boxes for safe-keeping. But, what is it like to honor the natural chaos as well? Let’s find out:

You have an upcoming show at Black Mountain Center for the Arts, opening May 6th and running through June 10th. What is the title of the show?

K: “order in an unruly zoo.” I came across that while reading about scientists exploring connecting a geometric structure to the universe. I often ponder chaos and order, how we live in, we swim in this. And, sometimes we’re conscious of it; other times we aren’t. I find all of the related components so fascinating: the mental, physical, reality, add a couple more here. It makes me ponder the, possibly unanswerable question, “What is this all really about?”

And it seems to bring up the concepts like how order can make us feel so safe. And, at the same time how order, with its constraints, feels like it’s controlling. How do you feel about this contrast.

K: Right. How often do we fool ourselves that we are in control? And, that’s so far from the truth. At the same time, you also don’t want to be so chaotic that you’re out of control, where you have no parameters in which to regulate yourself.

Do you think order and chaos are a symbiotic relationship?

K: I say it is, because one: as science advances, and as we create technology to record, or assess and collect data, these phenomenon that we have perceived as chaos, now we realize there’s an order to that. Look at the Fibonacci series: 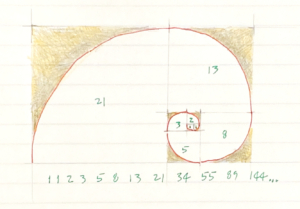 Mandelbrot, who came in with the idea of fractals, of objects replicating themselves, larger and smaller, in infinite.

“A fractal is a never-ending pattern. Fractals are infinitely complex patterns that are self-similar across different scales. They are created by repeating a simple process over and over in an ongoing feedback loop. Driven by recursion, fractals are images of dynamic systems – the pictures of Chaos.” (source: https://fractalfoundation.org)

“The Mandelbrot set has become popular outside mathematics both for its aesthetic appeal and as an example of a complex structure arising from the application of simple rules. It is one of the best-known examples of mathematical visualization, mathematical beauty, and motif.” (source: Wikipedia)

And now, they’re looking at how fractals, are kind of like their own bodies, like veins, rivers and tributaries. They’re so much replication going on.

Below is an example of Kenn’s exploration in fractals, using layers of metal screens, suspended from the ceiling.

That is making me think of the Gaia Hypothesis, where the whole of the earth is its own living, breathing organism.

K: I was watching a documentary recently about trees and how they grow, there is a fractal connection to them: with distance, ratio and proportion of them. I guess it depends on what question are you asking. What is the goal? What are you looking to achieve? That has always fascinated me, about how we make all of these connections.

Yes, like trees communicate with each other. And how a tree will draw what nutrients it needs from the soil, and then deposits those that it does not, around its base. And this in turn, attracts plants that need those deposited nutrients to grow around the tree. It forms a plant community. They have a symbiotic relationship.

K: Right. That’s another system of social organization. That to me is incredibly fascinating. It leads me to so many different areas. And then, I have to be careful, because I’ll get stuck in these rabbit holes.

I wonder how you organize your thought process. Do you have some sort of structure? When I look at your work, I see a sea of questions lying in the background, but then, it appears like some of the questions have been answered, or resolved. I feel a sense of inner-relatedness.

K: I hope there is a sense of calmness to this, because some of this is erratic at times, a frenzy. So much detail is broken up. But, oftentimes through color and value, I want these things to sit nicely in relation to each other, as opposed to being so aggravating.

So, if you had to create a list of all the things you like, maybe it would include clothing, and food, music and so on. And, these days many of us like so many different elements, but when someone looks at you, you are still an individual person. When I start working on something, it goes through that same push and pull. And, sometimes, I am working on a painting, and it is so frenetic, that I have to walk away for a while. So, I work on several pieces at a time. Then, all of a sudden, out of the corner of my eye, the painting will say, “Hey – get over here – it’s time.” 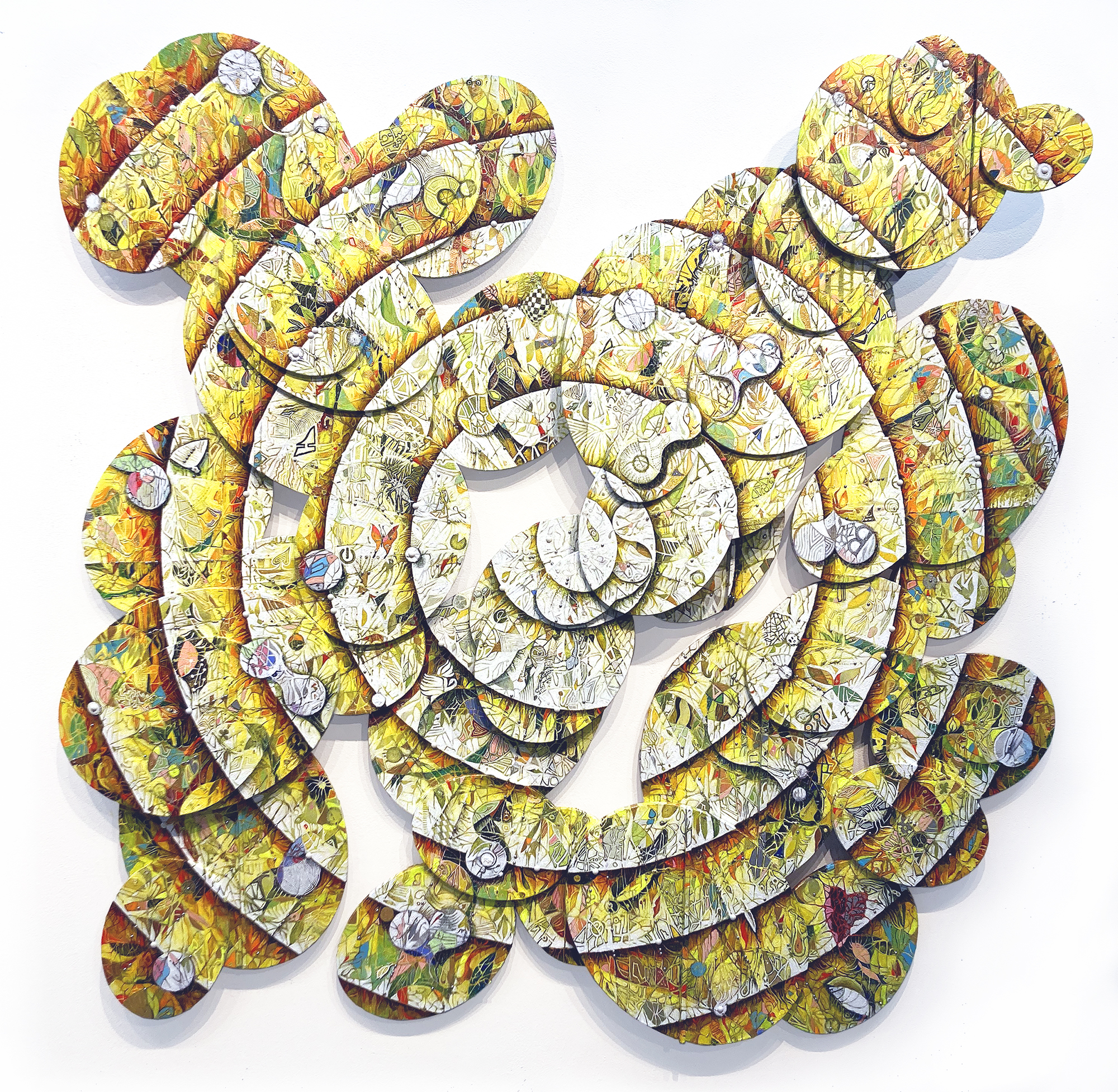 a ribbon at a time

I’m getting a trust component for this piece. In our lives, during challenging or stressful things happening around us, one can choose fear, or one can trust that no matter what happens on the outside, we are fine. So in this piece, I see a playfulness. It feels like all of these little objects, shapes, lines, entities, themes, and questions cohabitate together. It makes it feel like everything is okay.

K: Thank you. As I was working through this piece, I kept changing color. I had painted it all white, with a thin glaze. The texture and the lines were still apparent. And it wasn’t until I went to yellow that it felt right. I brought back in some white, and a push and pull between them started to happen. Sometimes I use the terminology that I am “subtracting by adding.”

To me, it could be more erratic and more complex, but when I added the yellow, it pushed it back to a place where I kept thinking about the sun: this orb, this ball of fire, that we can not live without. So then, as a metaphor, do we internally possess that energy that helps us to survive, and gives us a feeling that we are sustained, regardless of what happens on the outside? I have decided that I am not going to let myself be defined by these things. I am going to wake up each day, and serve the world in my best, possible way.

Yes, I feel like the source is always with us. When I get tested in life, I can see I have a choice: am I going to curl up in a little ball of fear, or can I be bold, and take action like never before. Doubt is my greatest saboteur.

K: That is why you are a creative spirit.

Wait a minute. You have been creating for over 40 years – you have doubt too?

So, here’s something interesting. This leads us to: you have a community, right here, in this room. These pieces have a history of their own. Some have been tucked away for years. What is that for you? Is there community/not community; friend/foe, …

K: Sure, I think we can use some personification here. You know, some are sitting here playing nicely, while others are bitching, sitting in the corner. But, it also depends on how I enter the space every day. After years of working, I now know that no two days are the same. One thing I have begun to do in my studio is to no longer play music. It’s because I’m unpacking all of these concepts, and it’s confusing to have yet another voice in the room.

This work has become more and more symbolic of where I am today: that this work pulsates outwardly and inwardly. Like, one day I can be full of doubt, and the next, I am full of confidence, and I’m just witnessing this process. And, I like that idea of humanity, the constellations, … all of these forces orbiting around us. But, recognizing them for what they are. And, many of those forces are invisible.

Do you know David Foster Wallace? One of his big books was called Infinite Jest. Unfortunately, he was a troubled spirit and took his own life. But in one of his lectures, he said, “There were two fish swimming in the sea. As they were chatting along, a third fish swims up and says, ‘Howdy boys, how’s the water?’ And the other fish say, ‘What in the hell is water?’”

So, I am in this place of looking at things with fresh eyes. Being objective, curious, letting it all unfold. You never know what will be revealed.

Let’s look at the beginnings of “a ribbon at a time,” where I was compiling a composition from the original, repurposed paintings. 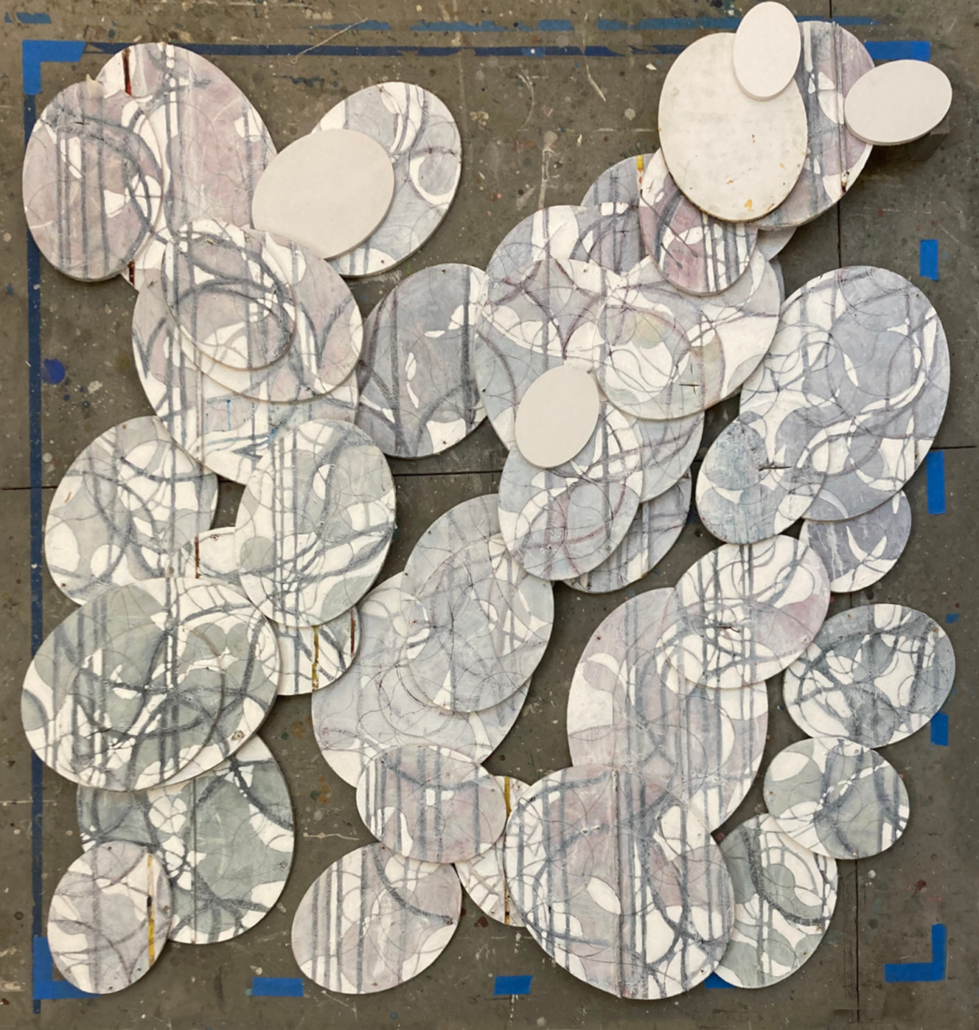 Here it is when I first put it on the wall and the concentric circles were introduced. 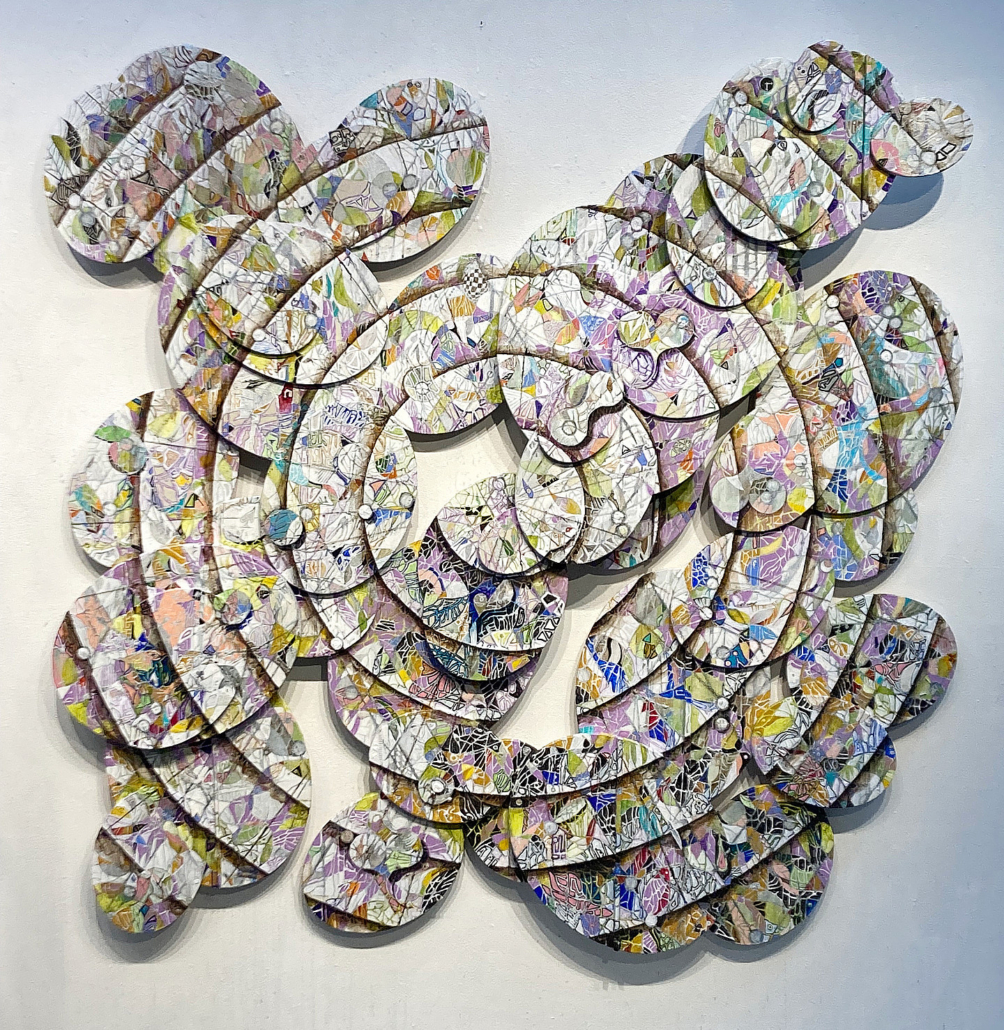 And, here is where it started getting interesting, when I started masking out areas with white. 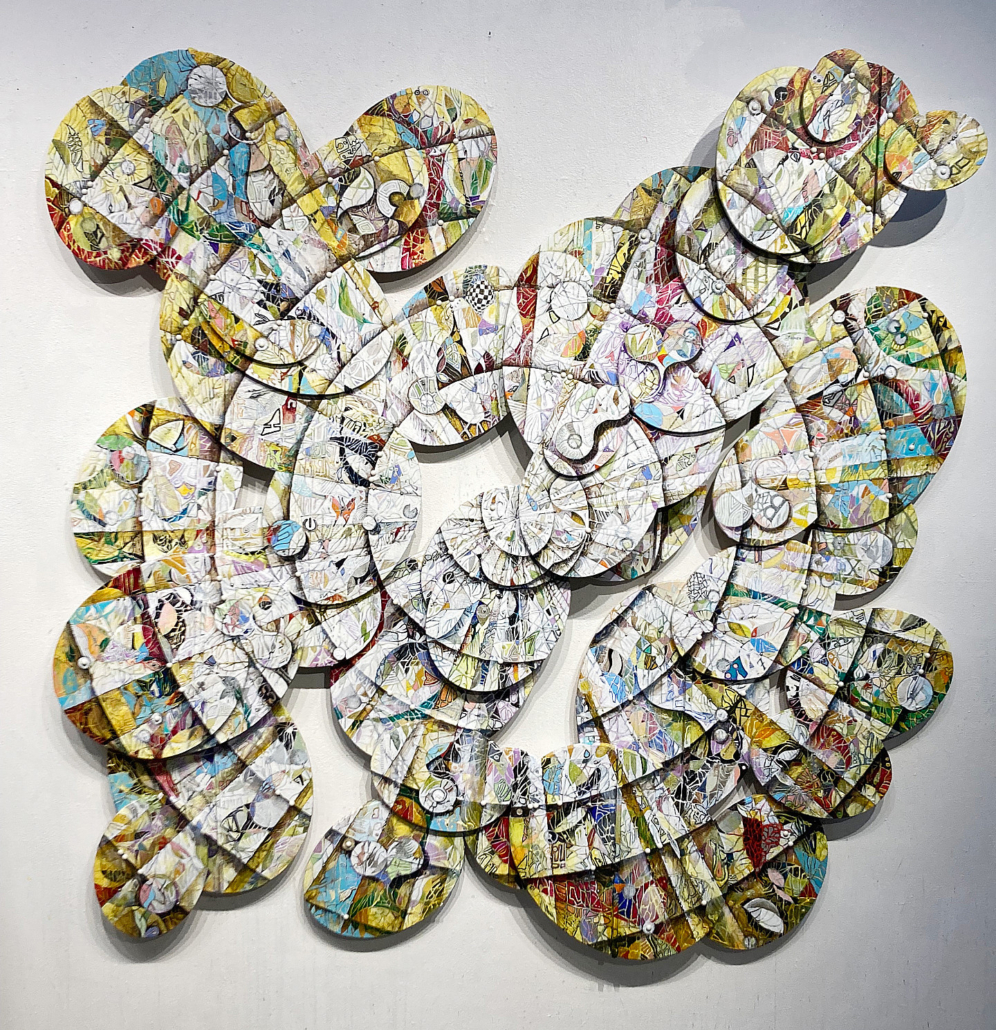 I had to put it aside for a while. Something just wasn’t right. But, the idea that the sun is the center of our life kept arising, so that’s when the yellow came in. 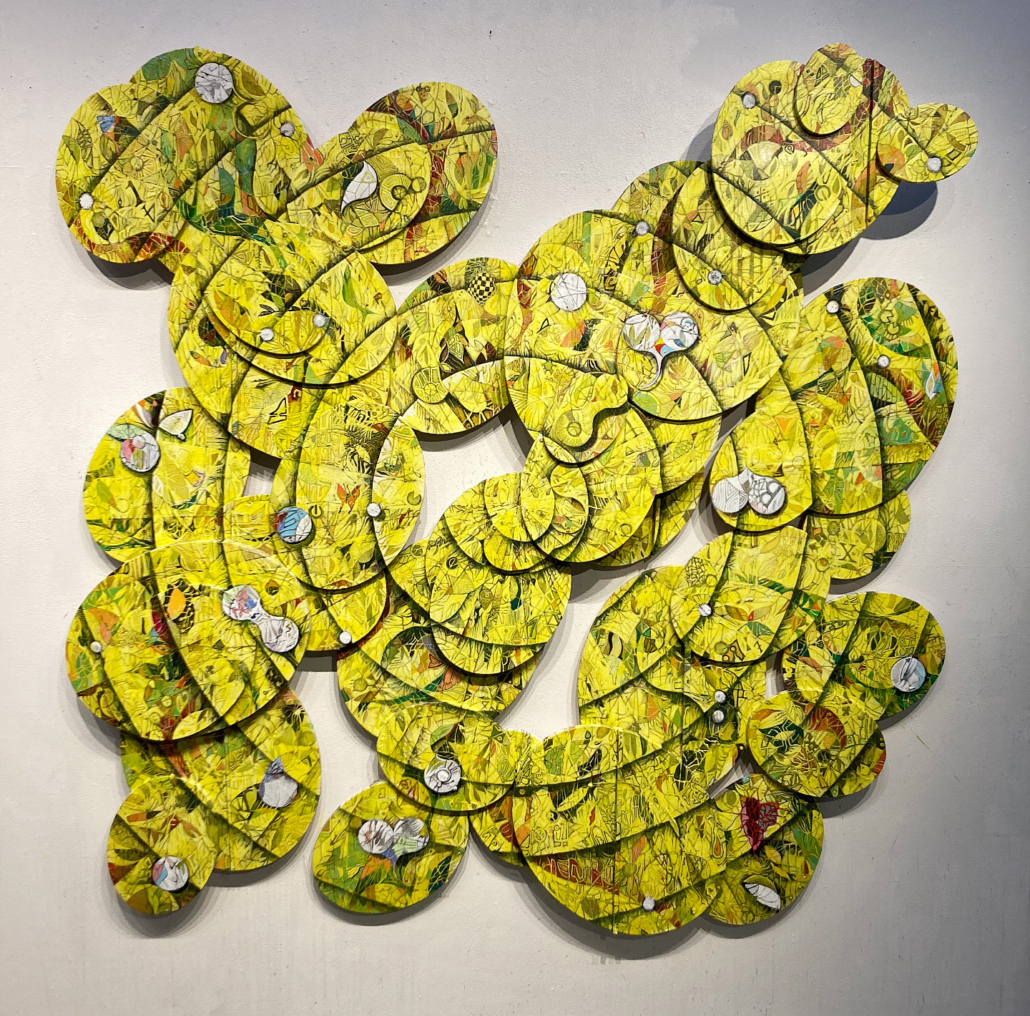 This is so interesting, because the concentric circles hold the same idea as the frame. There’s a harnessing going on, am I right? But, concentric circles have an expansive, infiniteness, which makes them have no boundary. So, it provides both a frame and a freedom simultaneously.

K: Right. I tried this on a couple of other pieces and it failed miserably. That moment when I stood back to see how it worked on this piece, was like, “Well, hell. This is it!”

This latest series, “order in an unruly zoo” will be exhibited May 6th – June 10th at Black Mountain Center for the Arts.