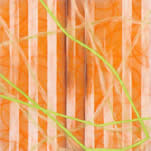 When Kenn Kotara speaks about his art work, he engages your intellectual curiosity.  “In the creation of abstract art forms, I am both initiating and responding to various inspirational catalysts, ranging from diverse issues that we humans must deal with on the one hand, to romantic notions of nature that were prevalent in days past, on the other.”  Fascinated with nature – of form,  space, and connections between people and their environments – this Asheville artist explores theories of natural and physical science, and the entire cosmos as he responds to creative queries, such as: How does form come into being?

Grid–based systems – layered, connected and interlaced by way of organic circulinear lines floating through them – recur in Kotara’s art.  This imagery often suggests patterns found in nature and mysteries of his native Louisiana bayou.  Closely related, his Mylar works shift toward nature’s fractals and number system, the Fibonacci series.  Here, his fascination with units both organic and mathematic guides iterations of graphite polylines on Mylar substrate.

“Flowers were the initial inspiration for this work but as I continued examining various shapes, I altered the individual element such that instead of being circular, it morphed into variants as it repeated.  I realized that the variety of repetitive shapes seemed to be somewhat like people.  People naturally strive for connection to community, and simultaneously long for distinction based on our unique qualities.  So, the individual component – a person, an organic fractal – is a cosmos in and of itself.  And when these units are composed – together and moving in rotation – we, like organic fractals, fashion complex universal systems.”

With his suspended screen structures, a troupe of dynamic and responsive structural networks break free from the two-dimensional plane.  In motion independently, the screens create moiré patterns of connection and oblique veiling.  They are activated by invisible energies within an exhibition space – people moving about, air manipulated by handling systems – and respond much as the as barbe espagnole (Spanish moss) of his home place, rarely in full repose.

This past spring, Kotara’s art appeared in the second season of the HBO series “Treme” about post-Katrina New Orleans.  Through March 4, 2012, one of his suspended screen structures, “Echo,” can be seen as a part of the Joseph Albers-inspired “Homage Squared” exhibition at the Asheville Art Museum.  And, in April 2012, he will exhibit in “Waking up with Van Gogh” at the Hickory Museum of Art, and in “Today’s Visual Language: Southern Abstraction, A Fresh Look” at the Mobile Museum of Art in Mobile, Alabama.  In Asheville, Kotara is represented by Gallery Minerva and his canvas and paper works can be seen there.

Kotara knows that in the end, his abstract contemporary artworks speak for themselves. “Perhaps the internal push-pull that is not necessarily revealed in my art forms, but without a doubt leads me through them, is that I find the whole notion of chaos fascinating and yet want to somehow make sense of it.  I believe that it all alludes to an underlying universal harmony that is hopeful. And, this hope is about democracy, unity and coming together.” Kotara Studio, LLC website: www.kotarastudio.com.