“the bucket, the water, the well,” Flanders Gallery, Raleigh, NC 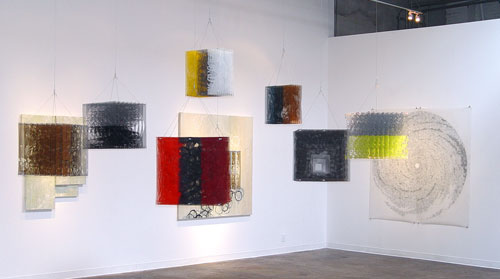 “It was this hazy tangle from tree to tree which made it all look so mysterious.” – Frances Hodgson Burnett, The Secret Garden, 1911

“Nothing could exceed the intentness with which this scientific gardener examined every shrub which grew in his path; it seemed as if he was looking into their inmost nature, making observations in regard to their creative essence, and discovering why one leaf grew in this shape, and another in that, and wherefore such and such flowers differed among themselves in hue and perfume. Nevertheless, in spite of the deep intelligence on his part, there was no approach to intimacy between himself and these vegetable existences. On the contrary, he avoided their actual touch, or the direct inhaling of their odors, with a caution that impressed Giovanni most disagreeably; for the man’s demeanor was that of one walking among malignant influences, such as savage beasts, or deadly snakes, or evil spirits, which, should he allow them one moment of license, would wreak upon him some terrible fatality. It was strangely frightful to the young man’s imagination, to see this air of insecurity in a person cultivating a garden, that most simple and innocent of human toils, and which had been alike the joy and labor of the unfallen parents of the race. Was this garden, then, the Eden of the present world?–and this man, with such a perception of harm in what his own hands caused to grow, was he the Adam?” – Nathaniel Hawthorne, “Rappaccini’s Daughter,” 1844

“the bucket, the water, and the well” – it is a phrase that echoes the incantational power of Catholicism’s “bell, book, and candle.” And well should it imitate the excommunicative curse, that finality so often utilized to divorce spiritual canon from personal experience and exploration. Kenn Kotara’s ethereal drawings, paintings, and mobiles continue a tradition of surveying one’s innermost and outermost worlds by surrounding himself with pleasing aesthetics, oftentimes resulting in both revelatory and unsettling discoveries.

Upon entering a gallery installation of Kotara’s works, one is immediately reminded of landscape design’s “il giardino segreto” (“the secret garden”). Be it Kotara’s semitransparent cut-wire screens – intentionally evocative of Spanish moss – or his blooming, fractal-like drawings, the space invites the viewer to discover and explore abstracted naturalistic imagery. However, in his clever framing of paintings – such as the layered oval windows tightly cropping out wider views in Conspicuous Crepuscular Bioluminescence – and the smudged areas of his intricately detailed works on paper, the presentation has the calculated effect of leaving visitors continuing to search and feeling like the keystone of comprehension is just beyond their grasp. Additionally, the layered treatment of lines in many of his paintings builds up a haze by using one opaque layer after another. Because this journey occurs within a walled, enclosed space and includes delicately floral-like abstract designs, it very fittingly gives the impression of a secret garden.

The secret garden, while typically describing walled enclosures within the history of garden design, had its most conceptual grounding in Renaissance Italy. Then it would have been one of the last areas of a garden to be admired, should the wanderer even be permitted within its perimeter. Its purpose was to serve as a sanctuary for noblemen that afforded the peace necessary for humanistic introspection. While it would seem to be the happy center for the kind of holistic healing espoused by Burnett in The Secret Garden, it was the place where philosophies of all kinds could take root, whether the sermons of the Church, or the instructions of Machiavelli. It could provide fertile soil for all ideas, regardless of their moral implications.

Admittedly, should one consider only Kotara’s abstract paintings, screens, and drawings on view, then this comparison would seem a stretch of the imagination. It is that he presents these alongside his Braille-based experiments in Minimalism that heightens the sense of unchecked meditation of all senses, and not simply the visual. Minimalism can suggest an aesthetic style celebrating physical properties divorced from a message. Kotara’s Braille works upend this expectation. For the seeing, these pieces do pass as studies of dots on richly colored and textured papers. For those proficient in reading Braille, they present classics of Western literature like Edgar Allan Poe’s “The Raven.” The content of these pieces becomes immediately apparent: It is mankind’s attempt to come to terms with the good and bad of his world. The very fact that the pieces have pointed content disarms them of their Minimalism. They are studies in seeing beyond looking.

In other words, further meaning is always present in one’s surroundings for those who are willing to look beyond their limited scope of experience and senses. The garden, like art, can be more than its arrangement; it is its odors, sounds, and textures as well. Also, one cannot simply learn about a plant’s growth by observing it; he must also study, at potential risk, everything that makes up its being, even the water that came from the well and its bucket.